The 2012 Nobel Prize in Physiology or Medicine 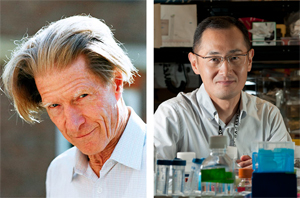 In October 2012, the Nobel Prize in Physiology or Medicine was awarded to two luminaries in the field of reprogramming, Sir John Gurdon of the United Kingdom and Dr. Shinya Yamanaka of Japan. This milestone celebrates a half-century–long paradigm shift in our understanding of the permanence of cell fate decisions in biology and has important implications for many fields of biomedical research, including research focused on lung injury, repair, and regeneration.

Fifty years ago, as an Oxford graduate student, Gurdon performed his seminal experiment demonstrating that the nucleus of a mature somatic cell, taken from the intestinal epithelium of a tadpole, could be transplanted into an enucleated frog’s egg, resetting or reprogramming the cell nucleus into an embryoniclike state able to then develop into a cloned frog (1, 2). These results were controversial at the time, as they demonstrated that development and differentiation are not necessarily one-way, terminal processes but rather can be reversed in the laboratory through the technically demanding feat now known as somatic cell nuclear transfer. Most importantly, Gurdon’s experiments settled a long-standing debate over whether a somatic, differentiated cell nucleus retained all the genetic information required to make all the cell types of an organism.

Thirty-five years later, Sir Ian Wilmut replicated Gurdon’s technique of somatic cell nuclear transfer to generate Dolly the sheep, proving that reprogramming adult somatic cells was also feasible in mammals (3). Hence, a race was on to discover which proteins or other factors that were contained in the cytoplasm of an egg might be responsible for the phenomenon of nuclear reprogramming. Although some researchers bet that hundreds or thousands of proteins would be required for effective reprogramming, Dr. Shinya Yamanaka, in his typically humble and understated way, announced in 2006 to packed audiences at scientific symposia and in a seminal Cell publication (4) that the transfer of just four transcription factors (Oct4, Sox2, Klf4, and cMyc) into mouse cells could reset the entire epigenetic landscape of a somatic cell, reprogramming it into an embryonic-like pluripotent state virtually identical to that of blastocyst-derived embryonic stem cells. Yamanaka’s term “induced pluripotent stem (iPS) cells” is now widely used to refer to the products of his reprogramming methods. In the short 6 years since his discovery, through hundreds of confirmatory publications (reviewed in Reference 5), we already know that iPS cells can give rise to an entire cloned animal and can also be derived from human adult cells (6, 7), including a variety of somatic cells, such as dermal fibroblasts, keratinocytes, or even peripheral blood cells.

The implications of Gurdon’s and Yamanaka’s discoveries for lung disease research are considerable, and the decision to award them the Nobel Prize just 6 years after the first publication of iPS cells will help to advance lung regeneration research and likely will benefit our patients in the years ahead (8). Within 2 years of Yamanaka’s discovery, human iPS cells were generated from skin fibroblasts taken from patients with a wide variety of monogenic or other diseases (9), and in 2010 the first 100 iPS cell lines were generated from individuals with genetic lung diseases, including cystic fibrosis and a1-antitrypsin deficiency–related emphysema (10). Patient-specific and diseasespecific lines have since been used to model the intracellular protein misfolding of mutant a1-antitrypsin protein (11, 12) or the aberrant intracellular trafficking of mutant CFTR (13) in differentiated epithelial lineages derived from iPS cells. In a research community where we frequently yearn for new models of human lung disease, iPS cells from our patients should now provide unprecedented opportunities to replay the emergence of human disease in vitro and to test whether the lung epithelial or other lineages being derived from patient-specific iPS cells might also predict or model the person to person differences in disease severity observed in our patients. In addition, testing drug efficacy or toxicity in vitro using patient-specific iPS cell derivatives raises the exciting possibility of using these cells to develop personalized therapeutic approaches in the years ahead.

A particularly exciting albeit futuristic application of iPS cells is for tissue engineering differentiated cell lineages or organs from each patient’s iPS cells. Because iPS cells are genetically identical to their patient donor, the tissues or organs derived from those cells should be immunologically tolerated if ever transplanted back into their donor, raising the tantalizing possibility of orthotopic transplants of cells or entire lungs derived from a patient’s own reprogrammed cells (8). Engineering autologous, transplantable human lungs from patient-specific iPS cells remains years if not decades away; however, proof-ofconcept studies have already demonstrated techniques for generating transplantable, bioartificial lungs from primary rodent cells and, more recently, the engineering of alveolar lung epithelial tissue from pluripotent stem cells (14–16). In the case of monogenic lung diseases, custom-made nucleases for deployment in iPS cells are now available for correcting the gene mutations responsible for inherited lung disease. For example, in iPS cells generated from a patient with a1-antitrypsin deficiency, zinc finger nucleases were used to change a mutant Z a1- antitrypsin allele into a normal M allele. The gene-corrected iPS cells were then differentiated into human hepatocyte-like cells able to function and secrete a1-antitrypsin in vivo after transplantation into mice.

The awarding of the Nobel Prize legitimizes iPS cell research and now allows researchers to move on from debating the importance of these new cells to focus instead on developing the methods required to harness their full potential for biomedical research (8). What are the steps that are needed to apply iPS cell technology for the advancement of lung disease–related research? First, we should acknowledge that the main hurdle limiting progress in this field is no longer the capacity to generate iPS cells from our patients but rather our inability to efficiently differentiate these cells into mature lung lineages. Hence, the very difficult work of differentiating iPS cells into functional lung lineages, including all epithelial, endothelial, and interstitial cell types of the lung, will need to be one focus of research if iPS cells are to be effectively applied for in vitro lung disease modeling, drug screening, or future in vivo therapies. Because undifferentiated iPS cells resemble cells of the blastocyst embryo, intensive study of embryonic lung development should provide a road map for how to recapitulate the milestones of early development to effectively and efficiently nudge iPS cells in vitro toward the desired lung lineages (16– 18). Second, to avoid overly rapid clinical translation and premature in vivo delivery of iPS cells into patients, researchers (and their funders) would also do well to avoid overhyping the new cells and instead continue to promote the careful, rigorous, and reproducible experimentation required to understand the potential problems and limitations of a newly discovered stem cell population before any plans for deploying derivatives of these cells for cell-based therapies or other in vivo applications (8).

Perhaps the most dramatic lesson provided by the awarding of the Nobel Prize for reprogramming is the importance of continuing to support basic science research, even if that research initially appears to have little explicit clinical relevance (8). After all, Sir John Gurdon’s interest in the basic mechanisms that control the fates of tadpole and frog cells has culminated in Yamanaka’s derivation of iPS cells, a discovery whose clinical impact will now be a major focus of an entire generation of academic researchers and their biotech/pharmaceutical industry partners.

Author disclosures are available with the text of this article at www.atsjournals.org.