Looking to the future: a new decade of pulmonary arterial hypertension therapy

ABSTRACT: Pulmonary arterial hypertension (PAH) is a severe and debilitating disease characterised by vascular proliferation and remodelling of the small pulmonary arteries, leading to a progressive increase in pulmonary vascular resistance, increased afterload on the right ventricle and, ultimately, right heart failure. Although there is no ‘‘cure’’ for PAH, the availability of targeted therapies over the past decade has led to major advances in the management of PAH, reflected in improvements in survival in the modern treatment era. However, despite this, disease progression is inevitable in the majority of patients with PAH and overall the long-term prognosis, although improved, remains poor. There is a clear and urgent need for new therapeutic options, either through the development of improved drugs that act on targets established by existing PAH-specific therapies, or of agents targeting novel pathogenic pathways not addressed by currently available therapies. A number of such new agents that have shown promise in experimental models and preliminary human studies are discussed in this article.

The treatment of pulmonary arterial hypertension (PAH) has evolved considerably over the past decade as a deeper understanding of the underlying pathogenesis of the disease and the mechanisms involved has led to the development of targeted therapeutic options. However, despite advances in treatment and improvements in outcome associated with the use of these targeted therapies, long-term prognosis remains poor. Recent data from the French Network on Pulmonary Hypertension registry showed that the survival rates for PAH patients managed in the modern treatment era were 83% (95% CI 72–95%), 67% (95% CI 57–79%) and 58% (95% CI 49–69%) at 1, 2 and 3 yrs, respectively [1]. Although this undoubtedly represents a marked improvement on the median survival of 2.8 yrs reported in the National Institutes of Health registry data from the 1980s [2], there is clearly still room for improvement.

Although associated with a range of underlying aetiologies, all forms of PAH share a common pulmonary arteriopathy characterised by vasoconstriction, remodelling of the pulmonary vesselwall and thrombosis in situ [3]. Originally considered to be a disorder of vasoconstriction and vasodilatation, it has become clear that the predominant characteristic of PAH is abnormal cellular proliferation leading to progressive obliteration of the pulmonary vasculature. There has, therefore, been an increasing interest over the past decade not only in agents which act as effective vasodilators, but also in those which have antiproliferative and anti-remodelling effects [4]. Current PAH-specific therapies target one of three major pathways involved in development and progression of PAH: 1) the endothelin pathway targeted by the endothelin receptor antagonists (ERAs); 2) the prostacyclin pathway, targeted by prostacyclin analogues; and 3) the nitric oxide (NO) pathway, targeted by the phosphodiesterase type-5 inhibitors (PDE-5i) [3]. While it is probable that further advances can be made using existing therapies (e.g. as part of combination regimens or in specific patient populations), there is also the need for the development of new treatment options, with improved efficacy, safety, tolerability and/or convenience profiles. There are two approaches that can be taken to develop new agents for continued improvements in the treatment of PAH: 1) new, more efficacious or more convenient drugs that act on established pathways already targeted by existing PAHspecific therapies; and 2) agents targeting novel pathogenic pathways that are emerging as a result of continued basic scientific research in the field. This article discusses the rationale and key data behind a number of these new agents that have shown promise in experimental models and preliminary human studies and which appear to have potential as future targeted strategies in PAH.

Endothelin (ET)-1 has a well-established role in the pathogenesis of PAH. Treatment with ERAs has been shown to improve pulmonary haemodynamics, exercise capacity, functional status and clinical outcome in a number of randomised, placebo-controlled trials [5–12]. As well as its effects as a powerful vasodilator, ET-1 is implicated in vascular remodelling in PAH due to its ability to induce fibrosis [13], cell proliferation [14] and inflammation [15]. ET has a primarily paracrine effect, acting on local tissues to exert its effects. In fact, the majority (80%) of the ET-1 produced by endothelial cells is secreted basolaterally and, therefore, into the tissue rather than apically into the bloodstream [16]. The effects of ET-1 are mediated by two cell surface ET receptor subtypes, both of which have been implicated in the pathological processes associated with PAH [17]: ETA receptors, found on pulmonary artery smooth muscle cells, pericytes and fibroblasts in the vessel walls; and ETB receptors present on endothelial cells, as well as pulmonary artery smooth muscle cells. Current ERAs show extremely limited tissue penetration due to their highly ionised state (,99% for bosentan and 99.9% for ambrisentan [17]) which means only a small proportion of the drug can cross lipophilic cell membranes and, therefore, access ET receptors within the tissues. Improving tissue penetration and, thus, access to these receptors may increase the potency and efficiency of ERAs in PAH, not only with respect to an acute vasodilatory action, but also with regards to modulating vascular remodelling. 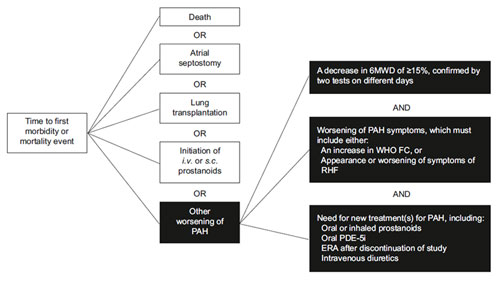 Macitentan is an oral dual (ETA and ETB) ERA designed to have improved tissue penetration due to an increased proportion of the non-ionised form of the molecule which is able to cross lipophilic cellmembranes [17]. In the ratmonocrotalinemodel of pulmonary hypertension, macitentan reduced mean pulmonary artery pressure (P¯ pa) and prevented right ventricular hypertrophy more effectively than bosentan, at a 10-fold lower dose, and resulted in significant improvements in survival [17]. Phase I and II clinical trials conducted to date have demonstrated that macitentan displays dose-dependent pharmacokinetics, and is well tolerated in healthy volunteers and hypertensive patients [18]. The phase III SERAPHIN trial, a multicentre, double-blind, placebo-controlled, event-driven study is currently underway, assessing the effects ofmacitentan onmorbidity andmortality in patients with symptomatic PAH [19]. SERAPHIN is a long-term, event-driven trial and is the largest prospective study in PAH to date, including ,180 participating centres in over 40 countries with 742 patients enrolled. The primary end-point of the study is time to first morbidity or mortality. The events chosen as trial end-points reflect the recommendations fromthe proceedings of the 4th World Symposium [20], and are designed to be robust and clinically meaningful, with a broad application in practice (fig. 1). The long-term nature of this trial is particularly relevant given that patients with PAH are likely to require life-long therapy. Global enrolment for SERAPHIN was completed in December 2009 and results are expected mid-2012. The observation period is expected to last for at least 1 yr for the last enrolled patient and for up to 4.5 yrs for the first patient randomised. The availability of long-term morbidity and mortality data from a controlled clinical trial is not only beneficial for assessing the long-term outcomes of patients on the active drug, but will also provide valuable information on the natural history of PAH.While long-term survival data can be obtained from open-label extension studies of shorter trials, there is a bias towards over-estimation of survival as: only responders are entered into the extension phase; a lack of placebo arm means comparison has to be made with historical controls; and, also, the majority of patients enrolled are prevalent rather than incident patients. Therefore, survival data fromlongterm, placebo-controlled trials should provide a more accurate estimation of survival.