Emphysema — A Disease of Small Airways or Lung Parenchyma?

In 1984, the Division of Lung Diseases at the National Heart, Lung, and Blood Institute funded a workshop that led to what is still the basis for most definitions of emphysema: “a condition of the lung characterized by abnormal, permanent enlargement of airspaces distal to the terminal bronchiole, accompanied by the destruction of their walls, and without obvious fibrosis.”1 In this issue of the Journal, McDonough et al.2 report findings that seem to challenge this definition — namely, the extensive obliteration of terminal bronchioles in patients with chronic obstructive pulmonary disease (COPD) who have emphysema. Indeed, when most people hear the word emphysema, they think of damaged or destroyed alveoli. Yet, as reported by McDonough et al., patients with various degrees of COPD have a narrowing and almost total loss of terminal bronchioles, sometimes with minimal quantifiable damage in the distal parenchyma.

This study raises key issues related to the timeline of the pathology in COPD, particularly with regard to the interaction between the peripheral airways and parenchyma. It has been known for almost a century that bundles of elastic fibers run the entire length of the airway tree from the trachea to the smallest airways.3 These elastic bundles are located in the mucosa just outside the basement membrane and give rise to the corrugated cross-sectional appearance of an airway lumen. This axial structural linkage between the largest and smallest airways is essential for proper lung function. In emphysema, damage to this mechanical linkage could occur at different sites, and the question of which comes first (i.e., the loss of terminal bronchioles or the loss of acini) is important in understanding the pathologic cause. If the axial fibers lose their tethering at their most distal ends, as happens with a loss of alveoli, they will recoil, and the resultant airway shortening could lead to the obstruction of small airways (Fig. 1A). However, if the inflammation in the small airways leads to their own structural damage, as has been described previously,4,5 then the tethering of the distal acini will disappear and the alveoli will lose the structural support that maintains normal architecture (Fig. 1B).

Although McDonough et al. suggest that the small-airway damage probably occurs first, their study was cross-sectional in a limited number of subjects, so causality cannot be proved. If alveolar walls were to weaken and become more distensible, this would be difficult to detect histologically or with microcomputed tomography (microCT), but it could contribute to narrowing of the inflamed bronchioles. It is worth noting that unlike the major narrowing of small airways observed by McDonough et al., Leopold and Gough5 in their seminal histologic study found relatively few severely narrowed airways leading to emphysematous regions.

Regardless of the initiating cause, envisioning how the pathologic changes affect the threedimensional structure is neither simple nor intuitive. If terminal bronchioles disappear after being completely obstructed and degraded as dead tissue, how then do the larger airways connect to the remaining distal acini? And if the small airways just disappear, why do the larger upstream airways stay obstructed? One of the technical limitations in the study by McDonough et al. was that it was not possible to identify airways with lumens below the resolution of the CT images (approximately 1 to 2 mm), so it is very possible that there were still fibrous connections to the distal parenchyma. Further analysis of the novel and quite spectacular sequences of 16-μm microCT serial sections in the online videos (available with the full text of the article by McDonough et al. at NEJM.org) may be able to shed some insight on this three-dimensional structural issue. 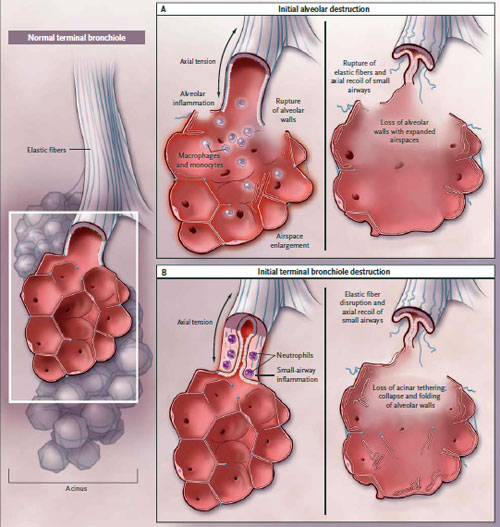 Figure 1. Two Models of Parenchymal Airspace Enlargement in Chronic Obstructive Pulmonary Disease. In Panel A, alveolar inflammation leads to the destruction of alveolar walls and the elastic fibers of connective tissue that link the acinus to the terminal airways. In addition to causing airspace enlargement, this allows the terminal bronchioles to recoil and obstruct. In Panel B, inflammation in the terminal bronchioles causes wall thickening, obstruction, and ultimate severing or stretching of the elastic connective- tissue fibers. In addition to allowing the bronchioles to recoil and obstruct, this loss of support for the distal acinus leads to folding and ultimate destruction of unsupported alveolar walls and enlargement of the duct. Although the respiratory bronchioles are omitted for clarity, they must also be involved in the loss of axial tethering in both models.

Finally, given this uncertainty regarding the pathologic progression of emphysema in COPD, it may be time to think about reconsidering the definition of emphysema. A new definition will clearly need to include more about the involvement of small airways beyond the simple absence of obvious fibrosis. On the basis of the work of McDonough et al., the permanent enlargement of the distal airspaces may serve only as a structural biomarker, being a secondary result of small-airway inflammation and destruction.

Disclosure forms provided by the author are available with the full text of this article at NEJM.org. From the Program in Respiratory Biology and Lung Disease, Johns Hopkins Bloomberg School of Public Health, Baltimore.